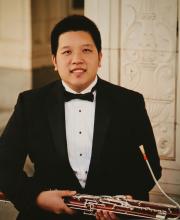 Julien Tsang is a senior at Kentridge High School in Kent.

He has been a student of Seth Krimsky, principal bassoonist in the Seattle Symphony, having previously studied with Bruce Carpenter and Matthew Johnston. He began playing bassoon at 12, and has competed at the Washington State Solo and Ensemble Contest for the past 3 years, taking 3rd place in 2015.

In addition to bassoon, Julien also plays the alto saxophone, where he is lead alto in his school’s Jazz band. He also participated in the 5th Avenue Theater’s Rising Star Project, where he performed in the orchestra pit in the musical, How to Succeed in Business Without Really Trying. This fall, he will attend the University of Washington, Seattle, where he will double major in bassoon performance and political science. Outside of music, Julien enjoys reading, discussing politics, volunteering at his local library.