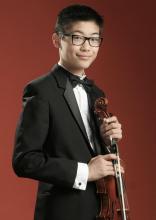 Takumi Taguchi is an 8th grader at Odle Middle School in Bellevue.

He has been a student of Simon James of the Seattle Symphony and piano collaborator Hiro David at the Coleman Violin Studio, having previously studied with Mihoko Hirata. Takumi began violin studies at age 2 with the Suzuki Method in Tokyo, Japan. He has won the 2015 Seattle Young Artist Music Festival concerto playoffs, 2015 Simon-Fiset Music Competition by Seattle Music Teachers' Association, 2014 Eastside Symphony Young Artist Competition, the 2011 and 2013 Bellevue Youth Symphony Orchestra Concerto Competitions, as well as the 2013 Suzuki World Convention Concerto Competition, which invited him to perform with a professional orchestra in Matsumoto, Japan. He is also the recipient of the 2013-14 David Tonkonogui Memorial Award by Music of Remembrance.

We are grateful for funding from King County 4 Culture, Seattle Office of Arts & Culture, and matching funding by Microsoft and Boeing.